French energy giant TotalEnergies announces that it will transfer its stake in a natural gas project in Russia's Siberia to Russia's joint venture partner Novatek. 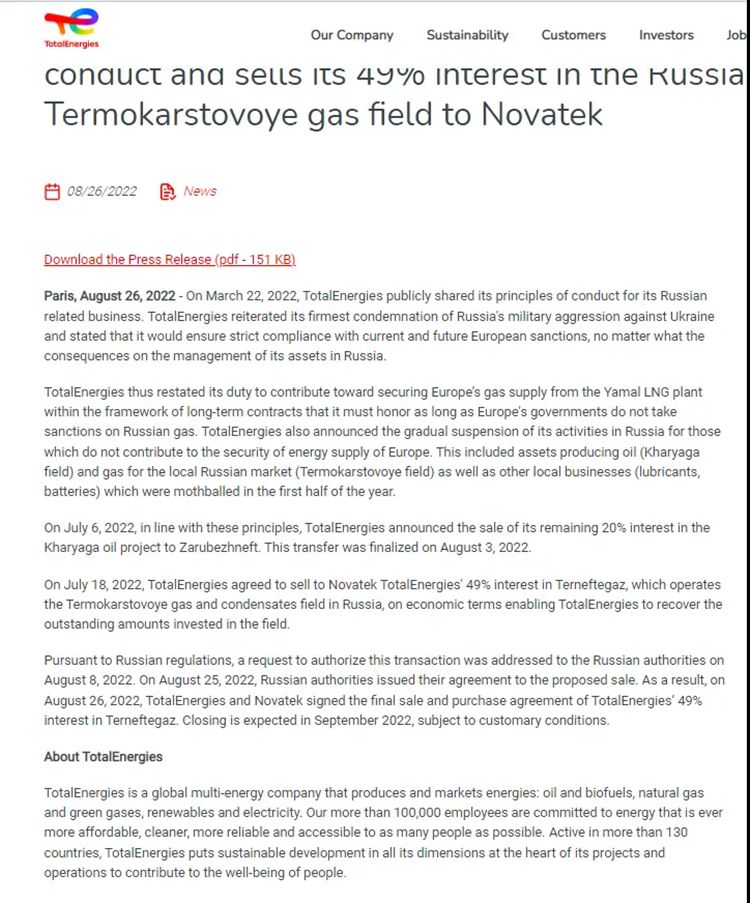 According to relevant introductions, Terneftegaz was previously established as a joint venture between large natural gas producer Novatek and TotalEnergies to jointly develop a natural gas field in Siberia, with the two companies holding 51% and 49% respectively.

TotalEnergies also pointed out in the announcement that as long as European governments do not impose sanctions on Russian gas, the company will continue to contribute to European gas supplies, and they will gradually suspend activities in Russia, including the production of oil for the Russian local market (Kharyaga oil fields) and natural gas assets (Termokarstovoye field), as well as other local operations (lubricants, batteries).

Since this year, a number of large energy companies including Shell and BP have withdrawn from their investment in Russia one after another. TotalEnergies has become the only Western energy giant that has not yet withdrawn from Russia, which has also drawn criticism from all walks of life in the West. Even the company's CEO, Patrick Pouyanné, previously stated that there is currently no alternative to Russian gas, and that it will not continue to invest or withdraw unless there is a clear notice of sanctions.

In addition, Europe is mired in an energy crisis and the price of natural gas has strengthened significantly. It is still unknown where the market will go in the future.